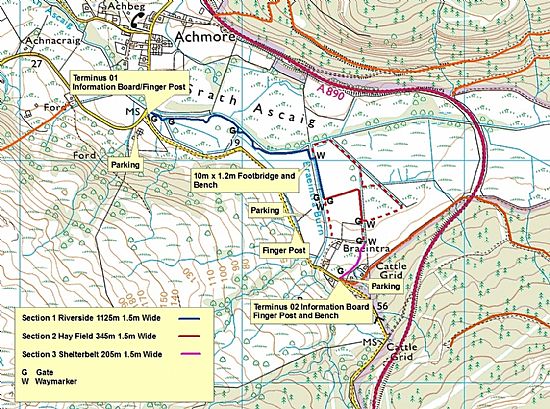 The proposal was to construct a footpath beginning at an entry point adjacent to Achmore Bridge (NG 857333) and terminating at Braeintra forestry track (NG 865325), with stock fencing, one standard design timber bridge, gates and other associated equipment (information boards, fingerposts, way markers, culvert and benches) and a descriptive leaflet will be produced to promote the new path. There will be provision for dog waste disposal bins.

The path was considered in the schedule of works as three sections (Riverside, Hayfield and Shelterbelt) with a short 70m break at a point known as the Nursery field where the path follows an easy existing route under a line of mature beech trees.  The path was constructed to the standard set out in Paths for All – Lowland Paths Guide; graded as 'easy' except for a short length at the Braeintra entrance graded 'moderate' (Paths for All, Path Grading System, January 2016).

With an entrance adjacent to Achmore bridge, the 1.5m path follows the existing fence line to the river bank then along three field boundaries and will be a corridor 3m wide with new stock fencing along one side (the river side is already fenced). Stock proofing is essential both for protection of, and from, livestock and the path itself. The land is generally flat and well drained (soft in parts). It crosses two existing large field culverts (with field gates allowing stock and equipment access between fields) and bridges the Braeintra Burn some 50m upstream from its confluence with the Ascaig where there is an existing watergate. The burn is 4m wide at that point and a further 3m of bridge on each bank gives sufficient vertical clearance for the Burn when in spate, which occurs after prolonged heavy rainfall. The bridge has a 1.2m clear deck and appropriate concrete or timber abutments have been constructed (See Path Bridges – Paths for All Partnership) and a timber bench provided. The path continues along 200m Burn bank upstream to the allotment bridge with no stock fencing required on this part. Here users have a choice to carry on, or use the allotment and public roads to return to Achmore.

This section follows the existing north boundary fence of the community hayfield, again a 3m corridor and stock fencing on one side, as the field is used for winter grazing for ponies. The path then turns south, with a field gate to permit access to the field further to the east, to exit point at the Nursery.  Here a stock fence is placed some 20m in from the current boundary (ditch and fence).  This provides a protected area for newly planted shelterbelt of mixed native woodland planting on land unproductive for hay.

From the south exit of the Nursery field, this path follows a moderate gradient through attractive planted mixed native woodland (Forestry Commission’s Woodland Grant Scheme, 2002) for 205m up to the Forestry track exit/entrance at the Braeintra road.  A timber bench is installed at the top along with fingerpost and information board.