The Fernaig Community Trust was set up to give the local community access to land, and to involve the community in decision-making concerning the land in this area, creating economic, educational, recreational and environmental benefits, for people resident and visiting.

The villages of Achmore and Strome Ferry, together with a few scattered groups of houses, form a discrete and well defined community of about 150 people. It is a fast-growing community, with a high percentage of the population under 18 years. Despite this, the range and quality of facilities available for all groups remains small. There is no school, shop, post-office or other facility within seven miles of the village, the only public building is the village hall, which was renovated in 2000. Employment tends to be centred away from the area and connected with support services, education and fishing as well as tourism, notably B&B. There is also agriculture; two small farms and two crofts. The bulk of the land is owned by the Forestry Commission, or private estates.

There has long been concern here about who owns and controls land, with decisions being made and benefits accruing to people outside the area. The idea that the local community should have some influence and control is very attractive to many of us, whether through land purchase by the community or by some form of partnership working.

Achmore is largely a “forestry village”, with eight houses built by FC in 1950, and most residents, until very recently having some connection with the Forestry Commission. Around 30 people collected their wages from the Achmore office in the 1960’s, but by the 1990’s this was reduced to one employee in the community. However, there was a feeling among some of us that the forest could provide more local benefit with a different approach, and when we heard about developments at Laggan in 1996 where they were negotiating forest purchase by the community, we thought it worth exploring.

The Trust now owns 110 acres of land, purchased in February 2001, which has been used to create small holdings and allotments. We also own the old forest office in Achmore. The field, shed and fank at Achmore bridge is not owned by the Trust, but we have a written agreement allowing community use.

Membership is open to any adult resident in the Stromeferry and Achmore Community Council area. Craig was added to this by special resolution. The annual membership fee is £1. Life membership £10.

People outside the area can be non-voting (associate) members.

The directors meet on the second Tuesday of every month.

The AGM was held in December 2021. The maximum number of directors is 9, but more can be co-opted. At each AGM half of the directors stand down by rotation, but may stand for re-election.

Following the AGM in December 2021 the FCT board consists:-

We have a Concordat (partnership agreement) with Forestry Commission, under which all management decisions in South Strome Forest are made jointly between the Trust and FC. It was signed in 2000.

Under the Concordat decisions concerning South Strome Forest are taken by the Management Group, which meets quarterly, with a quorum of 2 from Fernaig Trust and 2 from the Forestry Commission. The Concordat was revised in 2006. 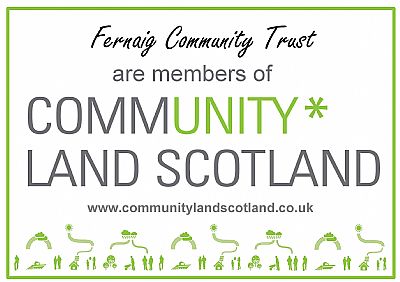