The Trust has a Concordat or partnership agreement with the Forestry Commission, under which all management decisions in South Strome Forest are made jointly between the Trust and FC. It was signed in 2000.

Under the Concordat decisions concerning South Strome Forest are taken by the Management Group, which meets quarterly, with a quorum of 2 from Fernaig Trust and 2 from the Forestry Commission. The Concordat was revised in 2006.

Pulling together views expressed by community members, the Trust came up with a Mission Statement in 2003

The following three main aspects have considerable overlap, and could be mutually enhancing

Landscape and Environment - We would like to improve the landscaping and environmental value of the forest, creating many direct and indirect benefits for local people and visitors alike.

Economy - We would like to steer the production towards more diverse products and markets, and more towards small local contractors.

Recreation - We would like to create more recreational facilities and opportunities.

4. Increase diversity of age structure, and move the forest towards an even distribution of age classes

In 2006 the Trust conducted a questionnaire to gauge opinion in the community regarding the forest. The National Forest Land Scheme had just been launched, and there would now be a possibility of forest purchase. There was a 37% turnout.

The most important thing to people was “the natural environment and wildlife”, followed by “walking” and “views”. “Firewood or woodfuel” was also important. Regarding what development was favoured in the forest, “Restoration of native woodland”, came out top. “More mixed woodland” “less clearfelling”, “more footpaths” and “more local employment” were also popular. 60% were in favour of purchasing forest land, (and 13% against) to achieve these objectives. There was scepticism expressed about the FC’s ability to deliver what the community wanted, even with the Concordat.

The main achievement of the partnership on the ground so far is the footpath network in Strome Wood. These were opened in 2002, funded by SNH, SALE, HC, and the Trust. The paths have proved very popular and have been well used, not only by individuals but also by groups like the Kyleakin day centre and the local nursery. There have been council ranger walks themed on fungi and ferns, and a day putting up nest boxes.

In January 2005  there were hurricane force winds on two separate days within a week,

and around 20 hectares of South Strome Forest was blown down, including a large area at the entrance to Strome Wood. This was mostly Norway spruce which had stood since 1927. The section of path through this area was hardly traceable after the timber had been removed from the site, but between the Forestry Commission and some volunteers the route has been re-established and a new path will be in place soon. The blown area is regenerating naturally with birch, rowan and conifers, and some ash hazel and oak and other native species were planted by Trees for Life volunteers. 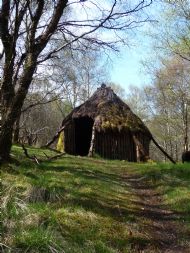 The iron age hut replica in the woods was built by the Achmore youth club lead by Jeff Berry and has been the venue for lots of activities.

The forest is well roaded, but some roads have become overgrown, and the Trust is keen to re-open these routes. Also, the forest roads are mostly dead ends, so we would like to add small lengths of path to a few of these to create circuits in the forest for walkers, cyclists and horse riders. There are also several old paths and rights of way which could be re-opened.

South Strome Forest, like all FC forests has a Forest Design Plan, which includes maps of what will be felled and when, and what type of trees will be planted. It takes into account landscaping, water, and other issues as well. Since the Concordat was signed, the Trust has been involved in this process on behalf of the community. There were problems with the completion of the Plan in 2004, with the Trust not being fully involved in the process. However, The Plan is currently being revised, with full Trust involvement.

In South Strome Forest there are approximately 170 hectares/420 acres where native woodland was replaced by planted conifers in the 20th century. There are also a few small remnants which remained as native woodland.

The native woodland had been present on these sites for hundreds of years, and this is known as ancient woodland. Ancient woodland is the UK’s most biodiverse terrestrial habitat. Returning the planted over areas to predominantly native tree species will help retain and regain their biodiversity.

The Trust has always been keen to restore native and ancient woodland, so it was very welcome when the Forestry Commission gave a commitment to this, and in 2007 they commissioned Trust member Colin Parsons to write a management plan to do this. The Plan also included management of other areas as continuous cover. This would mean that none of these areas would be clear-felled, but thinned, and small groups of trees felled so that the forest develops into a mixed age structure, retaining a permanent woodland environment. It will still be productive, and will produce a wider range of products.

Work has started this year (2010) on native woodland restoration, and we are currently planning the coming years work with FC. This work is mainly removing young conifers to allow space for the birch, hazel and oak, which is already growing. Removal of conifers along the Strome Ferry bypass will also open up views across Lochcarron.

The Trust always favoured work in the forest being done by local people rather than contractors from outside the area, and the native woodland restoration work has been done by two contractors from Achmore. Trees for Life have also helped with native woodland restoration, with work weeks being held at Strome. Local planters have also been used for tree planting contracts, and the Trust’s influence has also meant that 5,000 European larch were included in this springs planting (2010).

Larch is favoured by the Trust over Sitka spruce (the main forestry tree) for two reasons: the timber is more in demand locally because of its durability, and because, being deciduous, it is better for biodiversity and the environment, with a far greater variety of plants growing underneath it. Larch for the Plockton High School boat building project, Am Bata, came from South Strome Forest, and was milled by a local sawmiller. The kids from the project have been to the site to watch the trees being felled, and have planted more larch, ash and oak on the slopes of Meallan for future boat building.

Firewood has always been important locally and more recently wood chips and pellets are being used for heating. This creates an opportunity for local production, and the Trust has looked into the possibilities at some length. The idea of a Trust subsidiary company supplying woodfuel and sawn timber was investigated, but decided against, the preferred route being to encourage local private businesses. Grants have changed recently and it may now be worth looking into the Trust becoming more involved in this.

The Forestry Commission has always sold licenses allowing collection of firewood, but these have recently become considerably more expensive (nationally). The Trust is currently discussing with FC the possibility of a community firewood agreement, perhaps a single license for all members, or other ways of making firewood more easily available to everyone.